Pin Supu Forest Reserve is classified under Class VI - Virgin Jungle Reserve (VJR). Part of the VJR was previously under Sungai Pin FR which was first gazetted in 1958. In 1982, the whole of Sungai Pin FR was excised except 151 ha, which was added to what is to be known as Pin-Supu FR. The Pin-Supu FR was later regazetted as Class VI Forest Reserve on 14th March 1984 with a total area of 4,696 hectares.

The VJR is made up of 3 blocks of land, Block A, Block B and Block C. The largest is Block A and the smallest Block C. Block A and B are situated east and west of the Sandakan-Lahad Datu main road near the Kinabatangan Bridge. Block C is located about 11 km southwest of the other two. Both Blocks A and B can be accessed from the main road. Access is also possible by boat from the Kinabatangan River to the southern portion of Block A, and the whole western boundary and half of the southern boundary of Block B. Block C can be reached by Tung Hup oil palm plantation roads. Block C is generally very hilly and the terrain is similar to the hills of Block B.

Physically, Blocks A is relatively flat, low-lying and consists of peat swamps and freshwater swamps. There are 3 ox-bow lakes near the Kinabatangan River, two of which are Danau Biandong, Danau Tungog and Danau Kaboi. There are patches of hills above 30 m in the northeast, east and the south. Block B has hills over 90 m asl and slopes often greater than 25° along the eastern boundary. Hill crests are often very narrow. The hills are formed of interbedded sandstone and mudstone. Towards the north are low hills (between 30 and 60 m) and valley floors, with amplitudes less than 15-30 m and with a regular pattern of dissection. Slopes range from 0-25° but are commonly in the 10-15° range. A steep and high limestone outcrop is found in the northwest corner of Block B. The peak is called Bukit Supu Besar (about 180 m asl). The central portion is very low-lying, enclosed by hills. In addition, external drainage is impeded by broad levee zones on the Kinabatangan River in the south. Block C is generally very hilly and the terrain is similar to the hills of Block B.
There is an unsealed road at the northern boundary of Block A which begins at the Kg Perpaduan. The road leads through the VJR to a network of oil palm plantation roads. An Occupation Permit for 4 km of road inside the reserve is granted to Global Plantation. A community-run ecotourism site is established at Tungog ox-bow lake at the south of Block A near the Kinabatangan River. The Sabah Forestry Department is supporting this venture managed by the community of Kg. Batu Putih.

Certain parts of the VJR, especially Block A, are visited by tourists who stay at Kg. Batu Putih, where there is a successful community-run ecotourism operation initially called MESCOT (Model Ecologically Sustainable Community Tourism) which has a homestay programme for tourists. Today, MESCOT is known as KOPEL Bhd and is highly featured in a number of key tourism guidebooks and websites. The community is also involved in planting indigenous trees in the block for rehabilitation purposes.
Between Blocks A and B, the area is referred to as Mukim Batu Putih. It consists of 3 small villages, namely Kg. Mengaris, Kg. Batu Putih and Kg. Perpaduan with a population of about 1,500. Further north is Kg. Sentosa Jaya. The township of Bukit Garam is situated about 10 km east of Block B.
In 2015 the government has decided to excise 75.56 ha in Block A and B of the reserve which have been planted with oil palm by the natives surrounding the reserve. The excision has reduced the reserve to 4,620.44 ha. Thus, the total certified area covers the remaining area.

In the same year in 2015, Pin Supu Forest Reserve has successfully obtained their FSC “Well Managed Forest” Certificate for the period of five (5) years, starting 20th March 2015 until 19th March 2020. 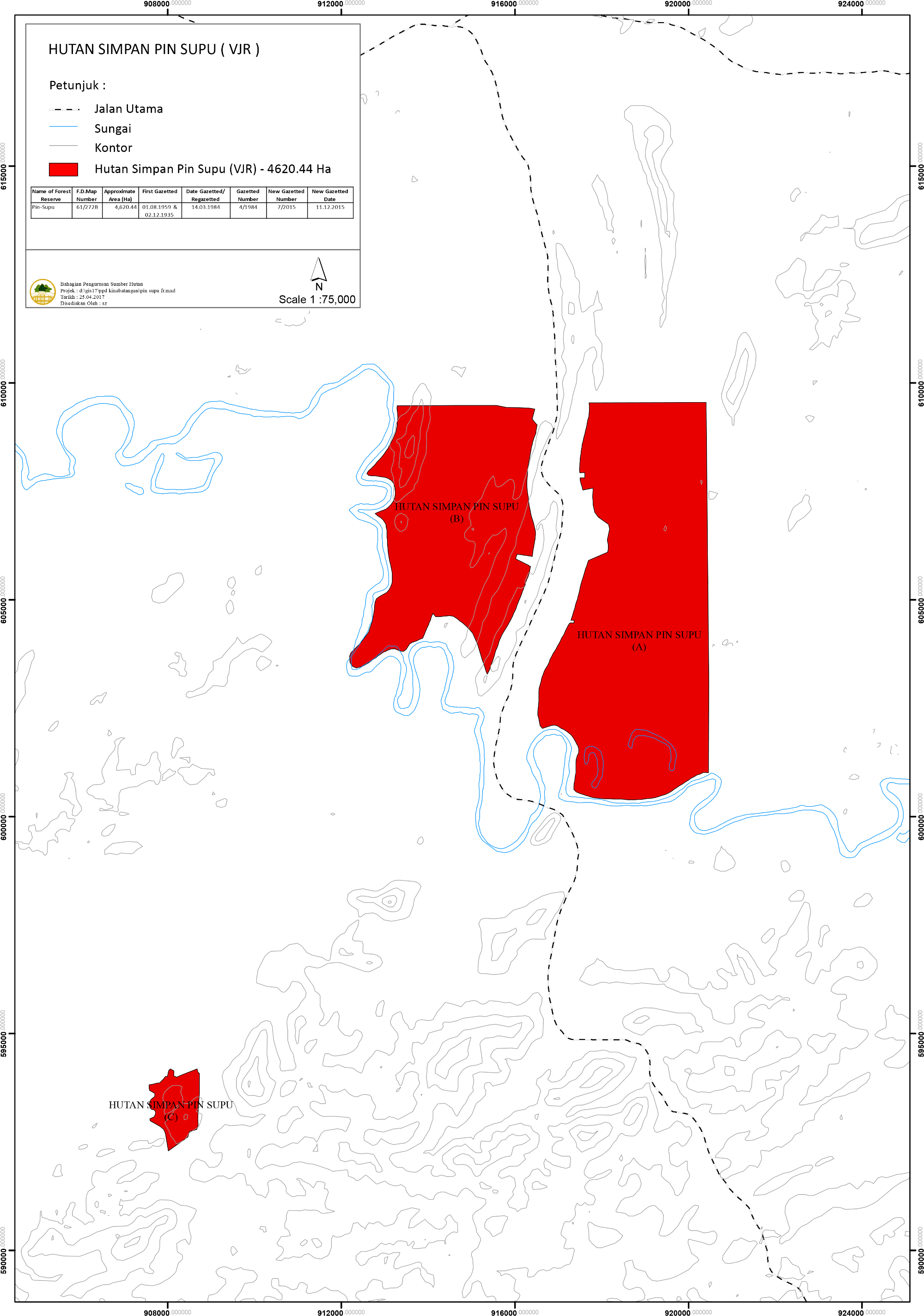 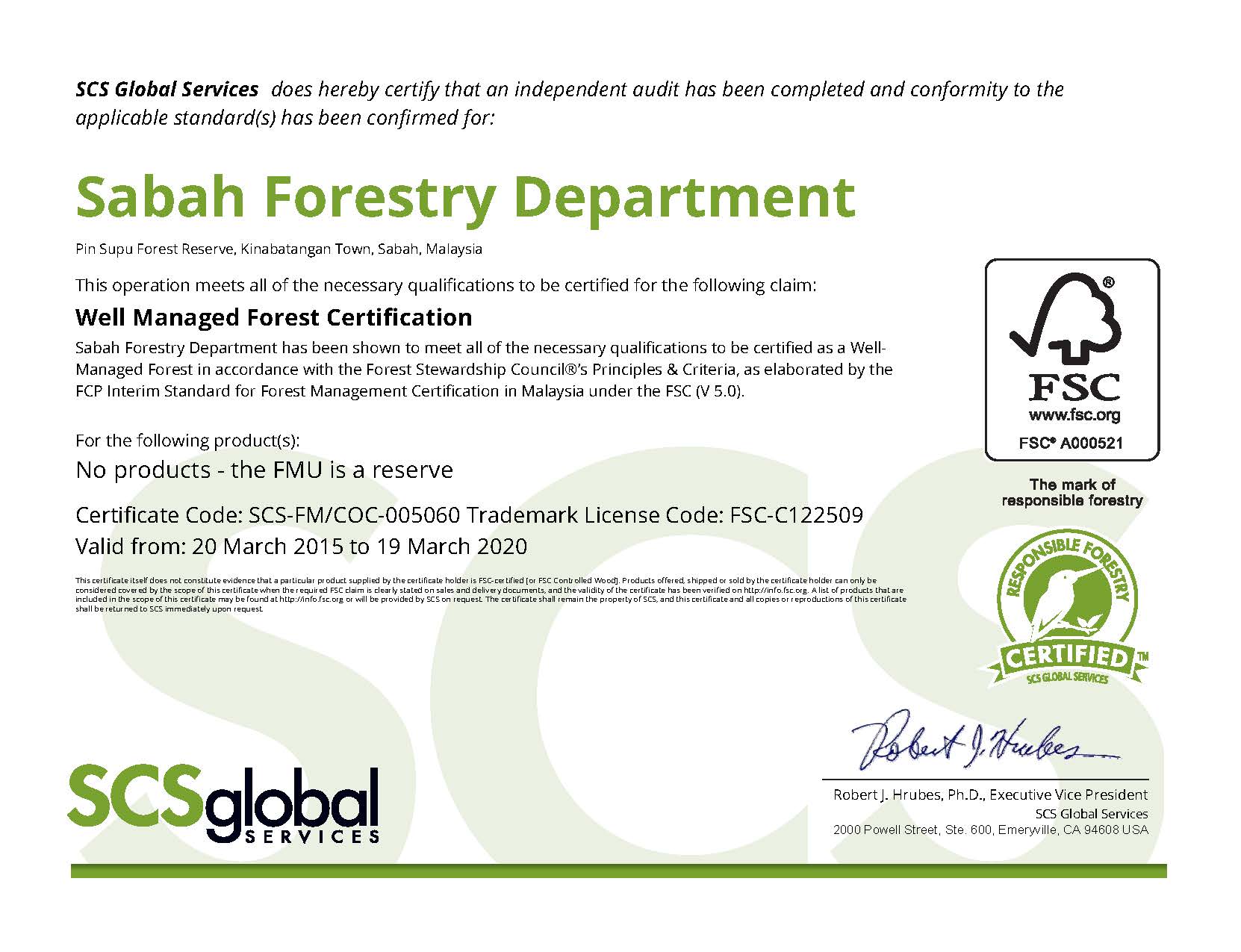 In 2021 PSFR forest certification was changed to the IUCN Green List.